When Libby inherits a mansion from the biological parents she never knew, it offers life-changing possibilities and the ticket out of her dead-end job. However, this once-lavish house holds the story of Libby’s first months of life, and she can’t sell until the truth is uncovered.

A newspaper article records how the house became infamous decades ago, when three adults were found dead in what was suspected to be a cult-related suicide pact. Concerned locals reported children living there too, but their identities were unknown and no trace of them remained. These missing children could be the only family Libby has ever known: the question is whether they want to be found.

The Family Upstairs is written with short chapters from three different perspectives, and this structure had me racing through it from the start! I was itching to find out how these three seemingly separate stories would become connected.

At the centre of it all is the house Libby inherits, which almost becomes a character in itself. Jewell creates such a creepy atmosphere, so you absolutely know bad things have happened within those four claustrophobic walls before anything is even revealed. 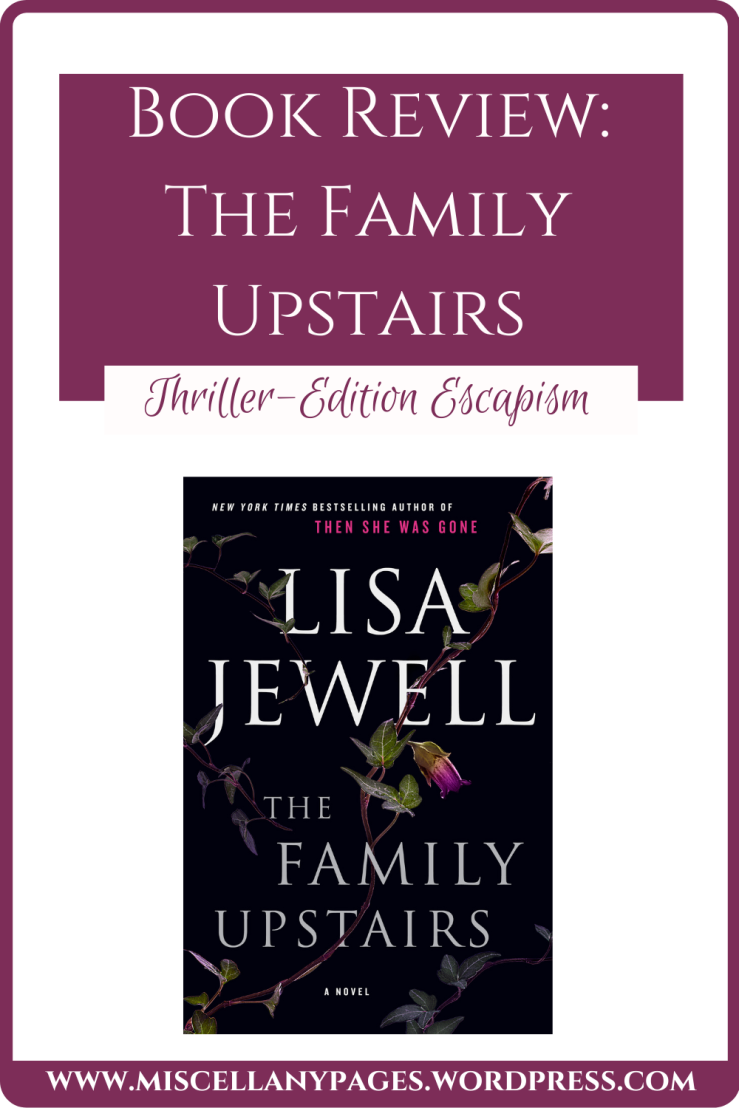 Although the novel certainly provided me with a hit of the entertaining, fast-paced escapism that only thrillers can offer, the more I read and thought about it, the more I noticed its problems. I did love Lucy’s character and found Henry’s contributions in the past timeline addictively disturbing. Yet Libby’s perspective never managed to hold my attention, which took some of the shine from the otherwise slick story.

When I discussed the novel with my book club, many people pointed out some of the story’s plot holes (such as unrealistically inept policing). In fairness, the extent to which these flaws affect your reading experience depends whether you’re reading analytically or just for pure entertainment. I’m not a massively detailed-oriented or alert reader so probably would have missed them!

While some elements of the plot were predictable, these were made up for by many twists that I never saw coming. Also, I loved that the ending seemed like it was going to be wrapped up too neatly, but then the author threw a spanner in the works right at the last minute to make it suitably unsettling!

One major issue with The Family Upstairs is that it inadequately deals with major traumas such as child abuse, domestic violence, and rape. The lack of space created in the novel to explore the aftermath of these horrific events made them feel sensationalist and was raised as an issue by many of the women in my book club.

As mentioned, The Family Upstairs threw in some seriously traumatic events which were never given space for sensitive examination. This made me wonder if the nature of the crime fiction genre, with its fast publishing turnaround and demands to raise our adrenaline, means that these books can be at risk of sensationalising.

However, I’m also aware that some books in the crime fiction/thriller genre provide genuinely incisive social commentary and would love your recommendations!

1. Did one of the story’s perspectives (Libby, Lucy, or Henry) stand out for you, and if so, which one? Or did they all equally appeal?

2. Can you recommend a crime fiction novel that provides powerful social commentary and deals with sensitive topics in a very comprehensive way?

3. What’s your opinion on the ending of the novel? Would you like to see a sequel?

“All men are weak … That’s the whole bloody trouble with the world. Too weak to love properly. Too weak to be wrong.”

Read If You need to forget about the state of the world with some thriller-edition escapism!

You may also like: The Roanoke Girls by Amy Engel

Have you read The Family Upstairs? Which Lisa Jewell book should I read next time I’m in need of a thriller fix? Let me know in the comments – I would love to hear from you!

4 thoughts on “The Family Upstairs by Lisa Jewell: Thriller-Edition Escapism”