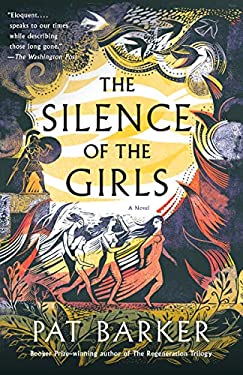 “Great Achilles. Brilliant Achilles, shining Achilles, godlike Achilles… How the epithets pile up. We never called him any of those things; we called him ‘the butcher'”

The bards sing of Achilles, hero of the Trojan War, but never the slave who shared his bed, Briseis. Taken from her fallen city, Lyrnessus, she is brought to the Greek camp besieging Troy and given as a prize to Achilles. No woman is better placed to strip bare the true inglorious agonies of war, both on and off the battlefield.

I first encountered the author Pat Barker when studying her Regeneration trilogy at A-Level, which is set at the Craiglockhart hospital for shell-shocked men during the First World War.

Barker’s matter-of-fact tone is perfectly suited to overturning the heroic narratives of war. She is able to replace these glorified stories with something far more visceral and ambiguous, whether writing about 20th century conflicts or those of ancient mythology.

I don’t tend to get as emotionally invested with books I’m studying, perhaps because the annotating and note-taking creates a greater sense of detachment. Yet I immediately found myself deeply moved by The Silence of the Girls and this attachment only got stronger. At the moment, I’m trying to persuade my Mum to read it so I have someone to talk about it with and vent my feelings!

Full disclosure: I absolutely adore mythology retellings, particularly those of Ancient Greece. In fact, I’m currently in the middle of writing my dissertation proposal on this very topic!

So I already knew from the get-go that I was probably going to love this book, but I didn’t expect it to become one of my all-time favourite retellings. Barker managed to include so much – from female solidarity to commentary on storytelling and power – that I ran out of stickers to colour code everything I wanted to note!

Our narrator Briseis is given a feminist awareness that lends her story reverberating significance:

“Yes, the death of young men in battle is a tragedy – I’d lost four brothers, I didn’t need anybody to tell me that. A tragedy worthy of any number of laments – but theirs is not the worst fate. I looked at Andromache, who’d have to live the rest of her amputated life as a slave, and I thought: We need a new song.”

The characters of Achilles and Patroclus are fascinating too, portrayed in their vulnerability as well as their sickening brutality.

The Silence of the Girls is the kind of fiercely feminist retelling that I love to read. Briseis’ voice is placed front and centre, with the battle scenes and masculine world forced into a back seat.

If I did have to make one critique of this book, I would have liked issues of class to be addressed in more detail. Even though all of the surviving women from Lyrnessus are enslaved to Greek soldiers, there remains a form of hierarchy between those who were formerly royalty, such as our narrator Briseis, and those who were enslaved even before the war and have merely transferred “ownership”.

“But nothing’s ever simple, is it? Incredibly, there were some women whose lives had changed for the better. One girl, who’d been a slave in Lyrnessus – and a kitchen slave at that, the lowest of the low – was now the concubine of a great lord”

There is always an untold story. Retellings are able to make this perfectly clear, and Barker delivers it up as a powerful message in The Silence of the Girls.

The more retellings I read, the more I look for these untold stories everywhere, not just in myths and fairy tales but also on social media, when watching a documentary or listening to the news. There is definitely a meaningful relationship between storytelling and power.

“We’re going to survive – our songs, our stories. They’ll never be able to forget us. Decades after the last man who fought at Troy is dead, their sons will remember the songs their Trojan mothers sang to them. We’ll be in their dreams – and in their worst nightmares too.”

Read if: You want to become immersed in a devastating feminist retelling of the Trojan war.

The Silence of the Girls

If you liked The Silence of the Girls and are looking for another epic feminist retelling, try Circe by Madeline Miller.

Have you read The Silence of the Girls? Do you have any mythology retellings to recommend? Let me know in the comments – I would love to hear from you!

19 thoughts on “The Silence of the Girls by Pat Barker: Devastating Feminist Retelling of the Trojan War”