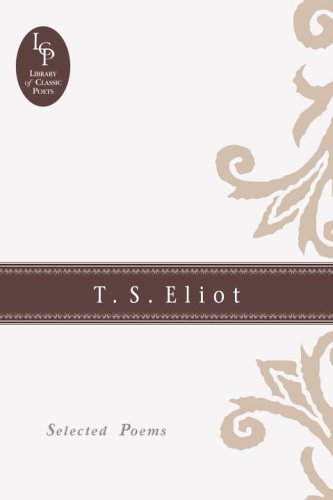 Synopsis: The modernist verse of T.S. Eliot is rich with literary tradition, but marked with the poet’s own unique style that startlingly expresses our alienation in a modern world. 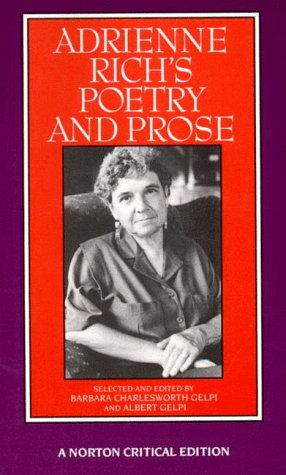 Synopsis: Rich’s poetry charts her journey to becoming one of the keynote poets of 20th century radical feminism.

From the deeply romantic to the no-holds-barred furious, her work is a multi-faceted portrayal of what it means to be a woman and a writer.

Questions Asked: Now, I’m not going to knock T.S. Eliot, as some of his poems (especially The Waste Land and The Hollow Men) make it onto my list of all-time favourites. Having said that, I’ll be the first to admit that he did have a pretentious streak!

While maintaining their depth and richness, Rich’s poems feel much more accessible and down-to-earth. When you don’t need another volume of notes to accompany them, that’s always a good sign!

My particular favourites are ’21 Love Poems’ and ‘Snapshots of a Daughter-in-Law’. She also wrote amazing essays (trust me on this) that explore women’s lives, specifically women writers, in a radical, empowering way.

“Lying is done with words, and also with silence.”

I love that Rich challenges the male-centred canon which poets such as Eliot draw on. Her poem ‘Snapshots of a Daughter-in-Law’ references tons of female writers, from Emily Dickinson to Mary Shelley!

Recommendation: My recommendation for these two depends on how familiar you are with Modernist and post-Modernist poetry. If you’re a beginner, I would probably start with Rich as she’s much less obscure!

However, if you’ve read Modernist poetry before (and likely encountered some of T.S. Eliot’s work in the process!) then it’s good to encounter Adrienne Rich afterwards, as you can appreciate how she has upended traditions.

You may also like Questioning the Canon: William Shakespeare and Thomas Middleton.

Have you read either of these poets? Have an under-rated book that you’d like to share? Let me know in the comments – I would love to hear from you!

2 thoughts on “Questioning the Canon: T.S. Eliot and Adrienne Rich”