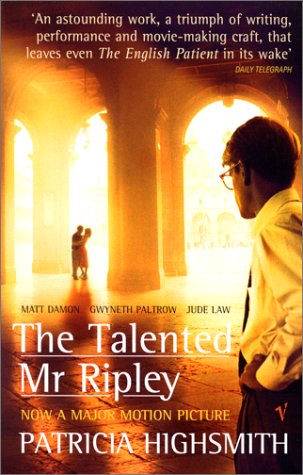 “Did the world always mete out just deserts?”

Tom Ripley is struggling to make his way in New York City, chasing the elusive American Dream while treading the edges of illegality. When the father of an old acquaintance approaches Tom in the hope that he can persuade his son, Dickie Greenleaf, to come home from Europe and take on the family business, Tom leaps at the chance.

However, from the first, it becomes clear that Dickie has no intention of obliging his father. His life in the Italian village of Mongibello is everything Tom has ever dreamed of: wealth, status, a luxurious lifestyle. Tom will have to return empty-handed to his sordid life in New York – unless he takes measures increasingly more extreme.

I found it very refreshing, if unnerving, to read a crime novel from the psychopathic criminal’s perspective! This could potentially reduce the element of surprise, but Highsmith manages to maintain an intense atmosphere of suspense and paranoia.

When I found out that The Talented Mr Ripley was written in the 1950s, I couldn’t believe it, as the themes are timeless and the writing style seems far more contemporary. To begin with, I found there was something amusing about Ripley and his frank indulgence of amorality. Although he never admits it, his evident loneliness also evoked a degree of sympathy.

However, as Ripley’s crimes became darker, it was unsettling to identify with him in this way. The paranoia reached a near-unbearable pitch until, in a drive to escape it, I found myself rooting for him to get away with his crimes.

This strange reading experience is an entirely new one for me! With such conflicting emotions, Highsmith’s novel does not fit easily into a single genre. While the story has elements of crime, psychological thriller, literary fiction and domestic noir, it continually transgresses the reader’s expectations and defies categorisation.

Debates continue to surround Ripley’s ambiguous sexuality (he seems to be either gay or asexual) and some actions are presented as a partial consequence of his repressed identity. This is an Own Voices representation: Highsmith herself experienced the difficulties of growing up as a lesbian in the conservative American South.

I found Highsmith’s parody of the American Dream fascinating. It made me consider the extent to which our modern emphasis on progress and social-climbing creates a culture of egotism.

“Thanks for all the wonderful memories. They’re like something in a museum already or something preserved in amber, a little unreal, as you must have felt yourself always to me”

Read if: You want to broaden your crime fiction horizons with an unsettling and subversive novel.

If you enjoyed The Talented Mr Ripley, you may also like My Sister the Serial Killer by Oyinkan Braithwaite.

Have you read The Talented Mr Ripley or any other books by Patricia Highsmith? What did you think? Let me know in the comments – I would love to hear from you!