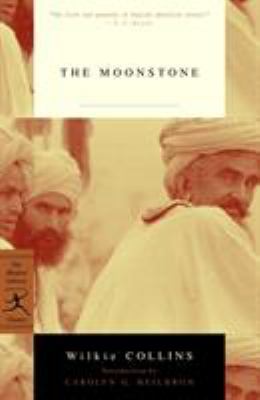 Synopsis: A diamond is stolen from one of the most sacred shrines in India. A young lady receives an extravagant birthday present in the will of her deceased Uncle. A London philanthropist is attacked in what seems to be a case of mistaken identity.

Connecting all of these events is the superstition surrounding the diamond: that it will leave a trail of blood in the lives of all those in possession of it. As inexplicable events plague the family holding the mysterious heirloom, Franklin Blake seeks to record witness testimonies and find a rational cause for the occurrences.

The family and their connections each contribute their version of events, but suspicions are rife and nobody knows who to trust. Not even the reader…

You’ll be finding a plethora of crime fiction on the blog in the next few weeks as it’s on my required reading list for a university module! What do you immediately associate with the crime fiction genre? Something fast-paced and dramatic, right?

Me too. Which is why I was initially surprised at the slow, winding structure of The Moonstone. Later, however, I would come to appreciate that the intricate plot does require a pretty detailed establishment.

Even before the first page, this book’s cover showcases the Indian settings that frame the story. Collins may have intended to make the novel seem interesting and ‘exotic’, but the undercurrent of colonialism creates a more unsettling impression today.

I admired the genuinely unpredictable plot that Collins has constructed, using careful research to make the story realistic. Some people can be frustrated by plural narrators, but personally, I found this helped to hold my interest. Having said that, the ‘testimony’ of each narrator could have been shorter to quicken the action.

By the time I had finished, the margins of my copy had ‘unreliable narrator?’ scrawled all over them! Presented with contradicting stories, unsure who to believe, readers are encouraged to engage in the story to an unprecedented extent.

English imperialism and superiority complexes are at the core of The Moonstone and can make the modern reader cringe. Misogyny is also rampant:

“It isn’t their fault (poor wretches!) that they act first and think afterwards; it’s the fault of the fools who humour them.”

Despite this, I questioned the extent to which Collins critiques these prejudices through the hypocrisy of his characters.

In The Moonstone, curiosity about crime is often perceived as morbid; characters appear ashamed to admit to it. Some even associate such curiosity with disease:

“Do you feel an uncomfortable heat at the pit of your stomach, sir? And a nasty thumping at the top of your head? Ah! Not yet? It will lay hold of you… I call it the detective fever.”

I couldn’t help considering the parallels with today’s society. Crime fiction and true crime are frequently perceived as crude, morbid or voyeuristic.

Nevertheless, both real and fictional crime have always fascinated us, revealing the rawest elements of human nature that lie beneath our carefully constructed society. So why do we wish it didn’t?

“They seem to be in a conspiracy to persecute you,” she said. “What does it mean?”

“Only the protest of the world, Miss Verinder — on a very small scale — against anything that is new.”

Read if: You like the sound of a classic mystery that is clever and tightly plotted.

If you enjoyed The Moonstone, you may also like The Hound of the Baskervilles (Sherlock Holmes #5) by Arthur Conan Doyle.

Have you read The Moonstone or any other crime fiction classics? Do you think we should read older literature in spite of its prejudiced and problematic aspects? Let me know in the comments – I would love to hear from you!